This was James, the brother of John, one of Jesus’ original followers. He was chosen by the early church to evangelize  Spain, so he walked and preached, making it to the place which now bears his name. He was starting a church when word reached him that Peter, the leader of the Jerusalem Church had been martyred. He returned to Jerusalem,  where he was also captured and martyred. His little band of church members in Spain (when he left, there is evidence that the church was about ten members strong!) stayed faithful and eventually received James’ remains and entombed him in a spot on which they built a church, later a cathedral. Thus, a pilgrimage was born.

All roads lead to Santiago De Compostela (sort of). Today, we parted ways with another pilgrimage headed to a location in the mountains where there is an ancient piece of wood, reputedly from the cross on which Jesus was martyred. The pilgrimage is well-known in Spain and many walk the way. It’s called Liebañes. We had never heard of this pilgrimage until a few days ago, when our camino intersected with theirs. We have also walked with individuals who have visited other sites, like Lourdes in France.

My friend Sharon and I took a train to Avila to visit the pueblo where Teresa of Avila and St. John of the Cross made their home. This was over ten years ago and now that I reflect on that trip of ours, which was mostly for fun (visiting Barcelona and Madrid), I realize that for both of us, going to Avila was significant spiritually. We stayed for those few days in prayer and in quiet, living in a local monastery/albergue.

Then where should one start their pilgrimage? Ideally, a pilgrimage begins at your doorstep. We’ve met a few individuals who have walked in this way. Two men from the Netherlands began their journey in Northern Holland, literally, they walked out their door and began the journey. By the time we met them in Santander, they had already been walking for three months. Their feet were tough, likewise their spirits. They packed up and left the albergue before everyone else was awake. These guys were at least 60-years-old.

Then, this evening, I spent an hour speaking with a young French woman. (She wanted to practice her English. Our conversation in French would have been short because of my very poor French.) This woman has walked the Camino multiple times, different routes each time. She says the journey is more important than the destination.

Yet, this young woman is truly seeking and hoping to find meaning in her Camino. She does not believe in God or care about any of the history I described above. Yet, she is a pilgrim.

There is a mystery to the journey that reaches many varied individuals. It’s hard to say why exactly. The road is not easy, but many find community and a sense of purpose in traveling together to a common place.

Pictured below are S and F, two Brits, friends walking and making the most of the cheap wine and food along the way. We had fascinating conversations with them about politics. One is pro-Brexit (working class kid). His friend is university bound and wants the Brits to stay in the EU for ease of doing business. Sometimes their arguments got so heated, they needed to walk separate for an hour or so. 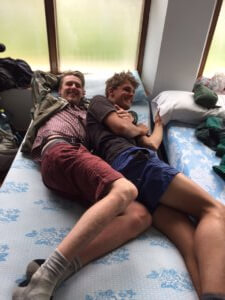 It is a rich experience to walk with and talk with this diverse crowd of pilgrims, traveling for so many different reasons. Their presence makes the journey more interesting and fun. Jason and I still see our journey as one of faith and hope, attached largely to our love for God, the Creative genius who put together this gorgeous planet. That only enhances the joy we feel in rubbing shoulders with people who may or may not agree with us on all those points. Our feet are sore, but our hearts are full.

Addendum: If the physical or the time commitment part of pilgrimage feels intimidating as you read the blog, I hope to dispel this notion now.

1. Many pilgrims walk for a week every year, adding together the journey in parts. Two German women walk every summer. They have gone three in a row and have covered about half of the #norte trek. They have not finished, yet, but they will in about two or three more summers.

2. Many pilgrims use a service or a support vehicle to take some of their belongings while they walk.

3. Some pilgrims don’t sleep in the albergues every night. They spend a night here and there in a hotel, for a little privacy and better sleep. (Snoring is a big feature of albergue living).

There are many options available for the determined pilgrim.

2 thoughts on “Who Gets To Be A Pilgrim?”