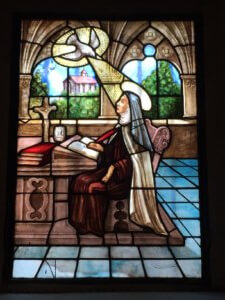 Ten years ago, I took a dream trip to Spain with my good friend, Sharon. We majored on two cities, Madrid and Barcelona. It was Winter and the museums were uncrowded and wonderful to visit. We focused on viewing art and eating local foods, but in the middle of our time, we took a 3-day prayer retreat in Ávila

I remember the city and its fantastic medieval wall. I remember feeling impressed by Teresa’s intense spiritual journey.

This time, with Jason, I am coming to admire her can-do spirit (might even call her an early feminist) and her leadership, particularly through her extensive writings about her experiences in prayer.

Santa Teresa wrote and published multiple masterpieces on the topic of mystical prayer. One called Interior Castle is sitting on my shelf at home. I confess, I have only read excerpts. This book has been translated into over 100 languages.

At the museum dedicated to telling her story, one area displayed copies of Interior Castle in English, French, German, Arabic, Japanese, Burmese, Finnish, Lithuanian, Cantonese, Polish, Hindi, Thai, Urdu, etc. This sole nun has influenced millions across cultures and across the ages through her written work

Another part of the museum pricked at my modern, western, privileged self. In the cool stone hallway, one exhibit had reproduced an exact replica of her room in the convent. The room where she had done most of her writing. 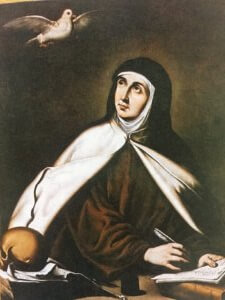 It was all stone, cavelike and small. It contained a bed, but no chair. The decor was simple and included a crucifix on the wall. In the corner, a trianglular shelf sat a foot off the ground. This shelf would barely hold an iPad. That’s how small it was. An inch thick cork mat sat on the floor next to that shelf. I asked the docent about the mat. “Did she sit on that?”

He told me. “Yes, the ground was cold, so she would sit or kneel on this cork mat for prayer and for writing.”

She wrote with a quill and ink. She wrote for hours at a time we know from accounts of her life. I imagine her crouched on this mat, or kneeling or sometimes sitting, dipping her quill into ink and scratching out her masterpieces.

I wanted to take a snapshot, so I could refer back to the scene, but the museum didn’t allow photos. I looked for a post card picture of the room in the gift store. There was none. I’ll have to rely on memory and my own descriptive writing if I want to “see” her room again. How fitting…to fall back on memory and the written word.

I have been reading a few historic accounts of Teresa of Ávila online to fill in my superficial knowledge of her.

Teresa came into her reformer identity (she is considered a reformer in the Catholic Church) in mid life. She had joined a convent in her early twenties, but came to see the community as a substandard vehicle for helping nuns to pray and mature in their faith.

There was a lot going on in the Catholic Church at the time. This was the era of the inquisition, something all Christians view as a huge stain on our community and the gospel. As with other “purity” movements in history, no person was exempt from persecution. One reads about the forced conversions of Jews and Moors, but Christians, with a different take on faith, prayer or theology were also targeted by the inquisition courts. Teresa did not escape their purview. In trying to establish a more disciplined community of prayer, she raised the fears of those (like most of the nuns in Ávila) who felt invested in the status quo.

Teresa devoted herself to  prayer in such a way that threatened nearly everyone around her. Her prayer imagining (in the Jesuit tradition of Gospel contemplation) of the passion story for an hour each day set her apart from nearly all of her peers, men and women alike. The fruits of that discipline resulted in a deep spiritual authority. She became a bold change agent, completely fueled by her thorough understanding of both the power and the grace of her God. There was no stopping her. A vision of the living Jesus consumed her.

When she was put under house arrest (forced to remain inside the new convent she had started), she prayed, matured in her faith and wrote about the experience. When the Church government harassed her followers and friends, she wrote to the Bishop and pleaded their cause. The quill was her sword and she wielded it with absolute dedication.

By now, you can hear how impressed I am. It seems weird to me that I didn’t realize this before. I have a new patron saint, an historic mentor, a hero. I want to be more like Teresa in her devotion to prayer and in her fantastic focus and work ethic. I will pin one of these images of her (in all of them she is holding a quill) above my desk to remind me what dedication looks like for a woman called to pray and called to write. 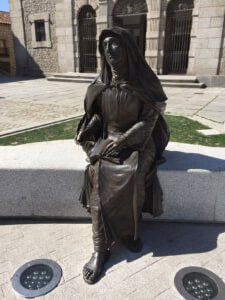