Most people who decide to walk the Camino Santiago, do a fair amount of planning beforehand. They purchase special gear, like clothing that won’t stink when you sweat in it day after day, light fabrics that won’t burden your pack and everything you bring ought to dry quickly (overnight if possible). You need to have the most ideal footwear and socks (there is a debate among Camino walkers about what are the best shoes for the long distance). Jason and I decided on hiking boots and we’ve been breaking them in for months now. We also purchased walking poles, hats, an umbrella (Jason left his behind), sleeping sacks (like bags, but sheet-thickness), and a few other items you might be interested to know about in case you ever do the trek.

About two and half weeks ago, we began hearing in the Camino rumor mill that the Frances, the most travelled and popular route was seeing record numbers of pilgrims. Word has gotten out! The way is popular and for that reason there is emerging a problem. From village to village, there are not quite enough beds for everyone. The Camino Frances is getting crowded. That was our chosen route.

Jason and I felt we had some thinking to do because of this. We could opt to still walk the Frances, or we could change to the Norte. It’s another route, whose history goes back to the time when the Moors/Muslims controlled much of Spain and Christian pilgrims had to be wary of venturing too far South, where the they might be harassed (or worse) on the Frances.

The Norte route is, as it indicates, further North, meandering through the Basque regions of Spain, then carving a challenging hike through the mountains and down into Santiago from the North. This path has a different name. It is called the Primitivo because it is the oldest known route into Santiago.

The Norte is extremely scenic, gorgeous. We will start in Bilbao (for time reasons, we cannot start at the beginning) and we will head West along the dramatic northern Spanish coast. Our way will be less populated, but also more challenging in terms of elevation gain and loss. There will be fewer services, services like bus rides from village to village, which are plentiful along the Frances, to assist pilgrms in need.  We wil walk on more pavement, we will eat amazing seafood and swim in the waters as a part of our trek and we hope we will experience spiritual depth as we attend mass or visit with pilgrims in the hostels.

But, we don’t know for sure. These are unknowns and mostly I feel fine about those, but in my stressed moments, I think to myself…I’m not going to make it. I get exhausted walking nine miles two days in a row in Norway. How will I accomplish this walk?

I’m sitting with that question. I don’t know the answer, but I think this is what pilgrimage is partly about. 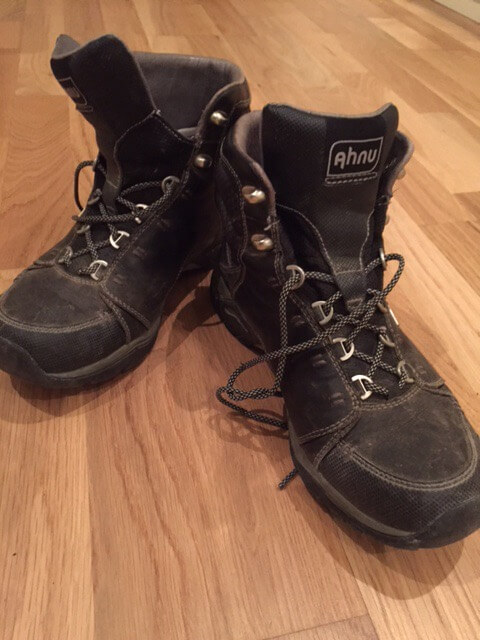 I hope to make the entire trek in these boots. I may need to post about the success or failure of my chosen footwear in weeks to come.

8 thoughts on “A Slight Change of Plans”